Erik Schaffer is the BIONIC BOSS. 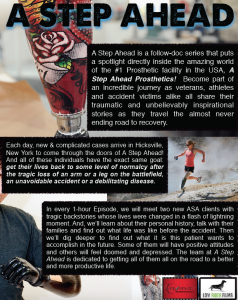 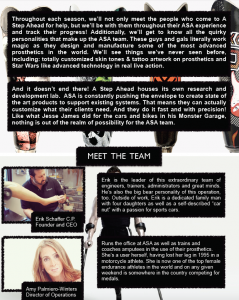 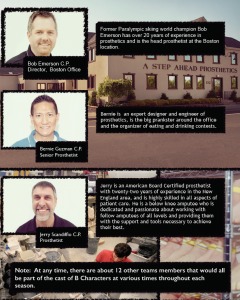 A Step Ahead Prosthetics (ASAP), in Hicksville, NY, is the #1 prosthetic facility in the country. ASAP is known as the destination for amputees looking for the ultimate in prosthetic care. Athletes, war veterans and accident victims come through their doors every day to get their lives back to some level of normalcy after losing an arm or a leg in a chance occurrence, an unavoidable accident or a debilitating disease. Some of the patience have been walking on bad prosthetics for years and need a change. There is a story behind every tragedy and an end game ahead waiting for every victim’s dream to come true.

Every week we will meet two new patients with tragic backstories whose lives were changed in a lightning flash moment. We’ll get their history, talk with their families and find out what life was like before the accident. Then we’ll find out what it is this patient wants to accomplish or achieve in the future. Some of the patients will have positive attitudes and others will feel doomed and depressed. It’s ASAP’s job to get them all on the road to a better more productive life.

In addition to the stories, ASA houses its own research and development lab, which constantly pushes the envelope to create ancillary products to support existing systems. That means they can actually customize what their victims/patents need. And they do it fast, precise and flexible. Like what Jesse James did for the cars and bikes in his Monster Garage, nothing is out of the realm of possibility for the ASAP team.

With any facility, there are the personalities/people that drive the program. Erik B. Schaffer is “The Guy” at ASA. He’s a big-bearded Teddy Bear who looks like Lyle Alzado but has the heart and soul of a champion. A father of 4 daughters, he’s a world-renowned, award-winning prosthetist, inventor, author, philanthropist, and entrepreneur who also happens to be a self-described “car nut” with a passion for sports cars. With over twenty-eight years of experience in providing custom-designed prostheses for patients with lower and upper extremity limb loss, Erik is considered to be one of the foremost authorities on prosthetic technology and his business.

It just so happens that his head administrator is one of his top patients. Amy Palmiero-Winters has been a runner since age eight, when she crossed her first finish line. In high school, she ran track and cross-country. However, in 1994, her left foot was crushed in a motorcycle accident, challenging her ability to ever walk – let alone run – again. Although doctors wanted to amputate her foot, she wanted to keep her leg, enduring twenty-five surgeries over the next three years. Though every effort was made, her ankle began to fuse, leaving her foot barely functional. Her final viable option was the amputation she had declined years earlier. ASA changed her life and now she helps others change their lives, too.

A Step Ahead Prosthetics has facilities in New York, Massachusetts, and Israel, but the show is based off the Hicksville, Long Island location.