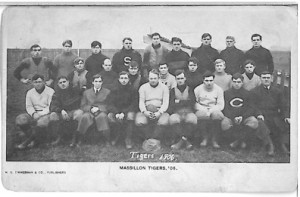 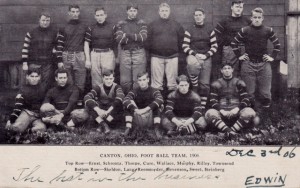 As the 100th anniversary of the NFL approaches in 2020, celebrations are being planned, but the backstory is missing… and it wasn’t a love affair right away.

Before the NFL, professional football was born in America, specifically, Ohio and Pennsylvania.

“MASSILLON” tells the dramatic and historically significant untold story in a six-part miniseries. Surprisingly, the full story of where and how our country’s most popular sport started has never before been pieced together.

At the turn of the twentieth century, there were few rules in the game, and it was brutal. Twenty-three people died playing football in 1905. The game was in danger of being outlawed by President Roosevelt.  Instead, he forced rule changes to promote safety, including incorporating the forward pass and line of scrimmage, by forming a committee with three founding fathers of football: John Heisman, Amos Alonzo Stagg and Walter Camp.

The rivalry between Canton Bulldogs and defending champion Massillon Tigers, cities 8 miles apart, was overheating. Passion and media hype exploded around the country for the TWO greatest teams ever assembled.
But an intricate gambling scandal involving these teams leading up to their World Championship series, to be
played at the end of their seasons, killed the pro game for nearly a decade.

Who was behind this scandal has been a mystery for over a century…. until now.

This series between Canton-Massillon ruined careers and lives forever…but there were also heroes who saved the game. The series foreshadows all the improprieties in sports yet to come: The birth of media hype in sports, creating heroes and villains for its own indulgences; the politics of damage control when lies and innuendos are being tossed around; players becoming the new cultural currency in the latest form of barbaric entertainment; the increasing weight of an ideology that a city’s status was somehow bound up in its sports teams’ achievements; amateurs playing illegally as professionals; gambling and other vices, such as prostitution, used for recruiting purposes, etc. The list goes on.

BEFORE THE NFL, the first “real” championship of professional football was played in 1906.  The events that led up to this championship series were so controversial that they brought to the forefront terms such  as boosters, collusion, tomfoolery, shenanigans, fix, bribery and scandal.  These games would be played between two backyard rivals: the Canton Bulldogs and Massillon Tigers, both of Stark County, Ohio.

The Bulldogs-Tigers gambling scandal was the first major indignity in professional football.  It was,  more notably, the first known case of professional gamblers attempting to fix the outcome of a  professional sporting event.  On Monday November 25, 1906, allegations of corruption made by Massillon Tigers’ manager E.J. STEWART and head coach SHERBURN WIGHTMAN, appeared in the Massillon Morning Gleaner.  Stewart also happened to be the Gleaner’s sports editor.

With both teams undefeated and vying for the “world’s championship,” Canton won the first game of two  between the teams (in Canton), and Massillon won the second (in Massillon).  Motivations for a possible third game in Cleveland then came under suspicion.  The article, written by Stewart in the Gleaner, charged Bulldogs’ coach, CHARLES EDGAR “BLONDY” WALLACE, and Massillon’s own end, WALTER EAST, with conspiring to fix both games between the clubs.  This created opportunities to rake in gambling profits, as well as demand for a dramatic decisive third game that would be played honestly, and draw a big gate.

Stewart claimed that Wallace, through East, attempted to bribe two of East’s Tigers’ teammates, BOB  “TINY” MAXWELL and BOB SHIRING, to assist in the scheme, while claiming that a pot of $50,000 was  made available to be wagered with $5,000 to be distributed to the Tigers’ management and accomplices.  Maxwell and Shiring were indignant and reported the offer to coach Wightman, who turned the evidence over to Stewart. This loyalty by the two players supposedly ended the scheme before it began.  However, when Stewart made the scandal public after Game Two, it started a media frenzy and civic pandemonium the likes these two small towns  had never seen.

MASSILLON transcends football.  The seeds of corruption in a national pastime were sown from this  one series: Boosterism, big money, powerful businessmen colluding with politicians behind closed doors, etc.  Not only is it about the first known gambling scandal in professional sports, but also the tomfoolery in  recruiting, and the importunity of amateurs being paid “under the table” as professionals.  It also sprung   the disproportionate increase in payrolls for players’ services due to the “win at all costs” mentality.

These games also initiated the birth of media hype in sports, creating heroes and villains for its own  indulgence, as well as the politics of damage control.  These players were the new cultural currency in  entertainment, and they carried the increasing weight of an ideology that a city’s status was somehow  bound up in its sports teams’ achievements.

Until this day, the story of the Canton-Massillon scandal remains a mystery shrouded with lies, innuendos and  misappropriation of the facts.

It has been said that there are three sides to every story, with the truth usually lying in the middle.  If this were Akira Kurosawa’s “Rashomon”, the main plot device would involve  various footballers and coaches providing alternative versions.  What is clear was that professional football, like humanity itself in the Garden of Eden, became corrupted shortly after its birth.  The 1906  gambling scandal ended the development of the pro game until the NFL organized in Canton in 1920 with  JIM THORPE, the world’s greatest athlete, playing for the new iteration of the Canton Bulldogs.

After thousands of hours of brain power, hundreds of hours of research and God knows how many hours of actual writing, the wonderful world of “turn-of-the-century” football has finally been completed — Endorphin Entertainment brings you – “MASSILLON.”

“Massillon” is a SIX-part, one hour per episode, limited mini-series made for either cable or streaming networks. It can also be condensed into one epic screenplay (3 hours of screen time) for that special director that has always wanted to make a great sports film. (Hello, Spielberg.)

“Massillon” is a reconfiguration of the dirty business of sports. The birth of pro football came during the height of industrialism and prolific wealth.  We were taking to the skies, crafting complex moving pictures, driving the first automobiles and forging big steel businesses up north. “Massillon” mixes the gruesomeness from “Game of Thrones,” the grittiness of “Deadwood” and the seediest chess pieces of “Boardwalk Empire” and combines these elements into one scandalous turn-of-the-century journey in sports history, circa 1902-1906.

“Massillon” reinvents a worn-out American genre, and defines it for a new millennium.  It forebodes all that is wrong with the business of sports today. There’s always satisfaction in sports movies about who wins and loses, but there’s a much greater pleasure to be had along the way when you deeply care about the characters and dig deep into the subplots. “Massillon” is about how emotionally corrosive the nature of sports can be, especially when it touches humanity’s darkest sides, rotting the strongest man (and woman) from the inside-out.

These are the SIX Episodes already written:

This has taken my best efforts and intentions, including two full years of research and writing. I’ve had several seminal moments during the course of my career when I’ve come across a story idea or experienced an event during production that clearly defined THE passion for what I do. It’s what makes my career so rewarding—the unpredictability of these seminal moments. I believe we will all make history together by telling the unknown origin story of pro football, the country’s #1 sport.