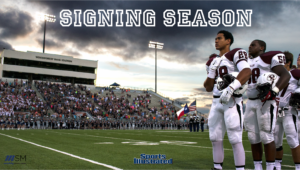 Logline: Signing Season is a documentary series that follows the top flight kids in high school, spotlighting
their circumstances and opportunities ahead. As they vie for a chance to make this sport a
career, recruiters play their own game, competing to to find the best talent on the field.

Synopsis: All across America, thousands of athletes are dreaming of superstardom and for many the path
to “Gridiron Glory” begins at the high school level. The recruiting side of football has become an industry and as more eyeballs than ever are fixed on these young athletes, several recruiting agencies have responded by providing non stop
publication of statistics and updates on the players. The competition between the recruiting services has become just as intense as the players.

Eric Winter, head of the recruiting site Rivals.com , boasts that his site caters to, “The hardcore fans, the players themselves, the parents of the players and, yes, coaches at major college programs, even though those same
coaches are not allowed at the actual camp events. It’s safe to say that all major Division One
programs subscribe,”.

Though Rivals is still the biggest recruiting site out there, it has had its share of competition as
FOX bought Scout.com, which is also subscriber based. Shannon Terry, the former CEO for
Rivals, also started her own subscriber/ad based recruiting site partnered with CBS news called
24/7 Sports.

Signing Season begins with Erik surveying a meticulously compiled list of “who’s who” among high school athletes and planning his journey across the country. Every year, he travels to the top high schools in the nation to meet with elite players and their families, while getting to know them both on and off the field. Through his evaluation process, the audience gets a glimpse into the rigorous process required to even be considered for a prestigious spot on a once in a lifetime team. As the National Recruiting Director for the Army AllAmerican Bowl, Erik will determine who has what it takes to play on the same stage as some of the best players in the
NFL.

Over the course of this series, we will meet athletes from extremely diverse backgrounds – from
over achievers to gritty underdogs – Signing Season will show that there are many ways to climb
the same ladder of success. While some players will win awards and accolades, others will cope
with the reality that their dreams may never come true.

The series will follow these players until the end of their senior year football season. It will join
their personal journeys as they prepare for and play games, visit college campuses, and make
difficult decisions about their future. Out of the 6.7 % of high school students that make into the
NCAA Football League, only 1.6 % of those players will go pro.

Some players will commit early while others will wait it out until signing day of their senior year.
When they ultimately decide to commit is unknown but one thing is certain – their
announcement will be covered by a flurry of news conferences, interviews, and thousands of
mentions on social media.

Signing Season shows the competitive nature of both the players and the individuals that recruit for
the nation’s most prestigious spots for young athletes, whether it’s a place in a bowl game or a
starter on an excellent college team.

Everyone’s hopes and dreams are on the line. Who will make it to the top? What will this dream
cost them? And how far are they willing to go?