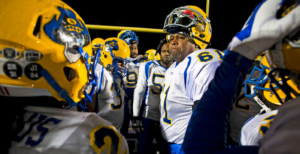 SYNOPSIS: With football, at all levels, under increasing scrutiny and pressure, why would any sane adult — and there are players that are pushing 50 — endure such thankless hurt over the course of mandatory weekly practices starting in April, and Saturday games from July through early November? It’s the lust for the sport, and nothing scratches the competitive itch quite like football; even if its Semi-Pro Football. Unlike high school football standings, scores in the Semi-Pro League aren’t even printed in their local papers.

Semi-Pro Football is an exhilarating game in leagues that are the equivalent to a grown man’s Pop Warner League. Make no mistake, this isn’t high school football. This is grown men football. There’s a big difference between getting hit by a high school player and getting hit by a police officer who had a bad day at work and is taking it out on you.

Weekend Warriors is a 1-hour hard-hitting, unscripted reality series that follows 4 teams in one of the toughest semi-pro football leagues in the country. While some teams and players are stylish city guys, with muscle cars, flashy cleats and bright canary helmets, some teams are relatively podunk, their grays and greens are as lifeless and depressing as their post-apocalyptic neighborhoods and playgrounds that they practice on. 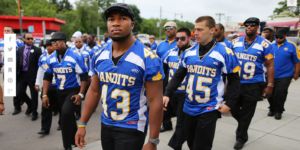 All in a day’s practice, there are tenured players roughing up young guys during practice drills while general managers and owners are trying to figure out ways to keep the team and the league afloat. Players bringing their own Gatorade and pissing in the woods is just a normal day for most of these men who have been chasing a championship ring since POP Warner. For a majority of them, this is their last chance. They’re putting it all on the line for one last shot of glory. No fame. No riches. Just glory from one weekend to next. This is Weekend Warriors.

FORMAT: Each episode we’re going to follow the league officials, the coaches, the teams, the players and their families. The series will be shot similarly to Esquire’s hit show Friday Night Tykes and documentarian-style like HBO’s 24/7. Most of these players are husbands, police officers, teachers, construction workers, etc. They all have interesting, dynamic with diverse backgrounds. 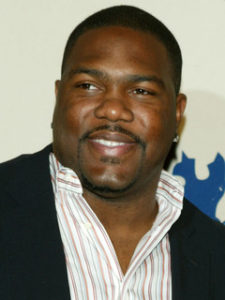 CHRIS HOWARD – As a team leader during the University of Michigan Wolverines’ perfect season and a share of the National Championship in 1997 as well as during a National Football League career with the Jacksonville Jaguars and Los Angeles Raiders, competing and winning at the highest levels comes as natural as transitioning to a sophisticated and business-savvy professional. Chris Howard is the founder
of Mosaic Entertainment Group. MEG is a development company that creates both scripted and unscripted formats to be sold to networks and studios. Mr. Howard also co-produced the film “Perfect Game” starring Clifton Colling Jr. and Cheech Marin, and has raised funds for film “Battle in Seattle” starring Charlize Theron, Woody Harrelson, Ray Liotta and the horror-spoof “Transylmania”. Mr. Howard has developed reality TV projects that have been optioned by Authentic TV, John Doe Media and Good Clean Fun. He along with his partner Josh Jacobs currently has two scripted series in
development with Intrigue Entertainment.