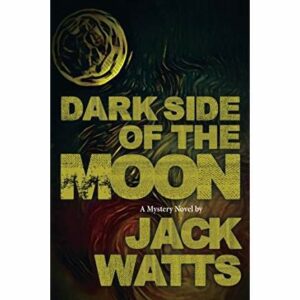 BASED ON THE NOVELS BY JACK WATTS:

Season Six – “Dark Side of the Moon”

ELEVATOR PITCH: Based on the books of Jack Watts’ “Moon Series,” this six-season medical/cop drama, pits the elite South against the seedy underworld of the Cajun Mafia and New World Order. The series is set to the backdrop of Celebrate Recovery, a Christian twelve-step program designed to facilitate recovery from a wide variety of troubling behavior patterns. Once a homicide occurs, and a pregnant grifter named Lulu Bobo comes into town, lives quickly unravel in the quaint suburb of Peachtree Battle. Come inside Sardis Methodist Church, as we follow these exotic, eccentric, and quirky characters who may surprise you, intrigue you…and even try to kill you.

LONGLINE— In this Fargo-esque series from the South, nothing is as it appears to be in this unpredictable, idiosyncratic series about the small southern metropolis of Peachtree Battle, Georgia.  A homicide, which appears to be an accident, looms large in this affluent suburb—the center of its celestial universe being two locations— the Peachtree Battle Medical Center and Sardis Methodist Celebrate Recovery program, a faith-based addiction group concerned with all addictions. Each episode will contain flashbacks, CR meetings and visits to urgent care, as the characters start to peel away their layers of mischief and mayhem… until no one is left unblemished. A cycle of mistrust, addiction, avarice, manipulation, malevolence and mystery layers each episode.

SEASON ONE: Every month, the full moon brings the “crazies” out, creating chaos at the Peachtree Battle Medical Center emergency room, where our leads, alcoholic, sex-addicted Dr. Marla-Dean Bennington and Soap-Opera handsome, philanderer, Dr. Luke Easton run the show, with help from Tiger Mom/Charge Nurse Melissa Gordon whose son is in rehab for opioid abuse.

On this night, there’s Ringman, an overambitious Viagra user with a sex toy issue; a thwarted teen, who lit himself on fire because of unrequited love; an 80 year old crack addict, and finally, a delusional, conspiracy-driven disgruntled ex-Wells Fargo employee named Terrance Bruce who complains that his constipation will result in colon cancer. How he eventually “takes care of his business,” prompts the hospital and the police to seek him out for a psychological evaluation. Terrance firmly believes he’s been targeted for assassination because of “what he knows” about the President and the New World Order. His survival is imperative, and he will do anything to “save the United States”—hero that he is.

When the police storm into his apartment, Terrance escapes out the back, runs down an alleyway and eventually reaches Nancy Creek in the heart of this southern town.  As he passes over a small bridge behind the famous restaurant, Joni P’s, a speeding, white SUV races towards him. A woman, Joy Fortune, is also crossing the bridge at the same time. The white SUV comes close to striking both. Terrance, fearful he is the intended target, leaps off the bridge and is impaled by a sharp children’s toy called the “Narwahl,” owned by a 5-year old autistic boy who lost it in the creek bed. He’s also the only witness, watching Terrance’s leap from his bedroom window high above.

The incident appears to be an unexplained, tragic accident to everybody other than our “hero,” Sean Kincannon. He is an unsuccessful state prosecutor with alcohol issues, who has failed three times to bring down the South’s biggest drug kingpin, Amiglio Sabata. After a night of drinking at Joni P’s, Sean blacks out behind the wheel of his white SUV. Believing the man’s death may have been his responsibility, the incident catapults Sean into sobriety.

Sean attends a CR meeting, where he meets Marla-Dean. She’s there to turn her own life around after a series of mishaps and questionable calls on her shift the night before. They soon connect and become our series “Nick and Nora Charles”—from The Thin Man movie series of the 1930s—as they try to figure out what actually happened on the bridge behind Joni P’s that night. They seem to be the only ones who care about the death of Terrance Bruce.

That is unless you don’t count Terrance’s best friend, Pencil—another substance abuser with an ax to grind. His wife has left him and has taken up with a Redneck twice his size.  As equally delusional as Terrance, Pencil decides to take over the job of “saving America” from the President and the Illuminati. Wearing his Georgia football helmet, he is able to discern secret messages sent to him by Fox News’, Veronica Hart. He receives the messages through the helmet’s secret antenna. While Sean and Marla-Dean seek to discover the truth, Pencil pursues an alternate investigation—one based on his grandiose delusions of bringing down the President and his New World Order.

Meanwhile, a terrified Joy Fortune, whose real name is Lulu Bobo, is hiding from her past. The white SUV might have been targeting her that night… and she knows it… After all, she’s connected to a series of affairs and a heist from New Orleans Capo, Anthony “Pretty Boy” Fellini. Lulu stole $800,000 from her gangster ex-boyfriend. They met while she was working as a stripper under the alias Ginger Snappe, Ginger has this snake tattoo coming out of her vagina…. an unforgettable tool for seduction she refuses to hide. Except now, it’s the only clue he has to find her after she changes her appearances.

After escaping with Pretty Boy’s money, Joy meets a young, High School pitching sensation, Joseph Gordon, coming back from a steroid and opioid addiction. He’s preparing to get drafted by a big league ball club and can’t afford a scandal. His mother, Melissa Gordon, will do anything to protect her son from this vixen. Little does Melissa know, Joy is pregnant, and it may be her son’s baby.

The suave, handsome ER doctor, Luke Easton had a short affair with Joy Fortune as well. The doctor may also be the father of her unborn child, which the guilt-ridden MD reluctantly admits to his wife, Patricia. Patricia Easton’s pretentiousness will not allow her husband’s tryst to ruin her reputation or her status at the Capitol Hill Country Club. She’ll protect what she has at any cost.

Finally, there’s Etowah Police Captain, Barbara Baird, whose level of deceit and evil is the antithesis of what “southern hospitality” is all about. She may be in over her head acting as a double agent for Drug Lord Amiglio Sabata all while trying to solve Terrance Bruce’s murder. She interrogates the only witness, 5-year old, reticent, Connor Hyde, who gives a ONE WORD clue that could solve the case.

Joy skips town, leaving everything behind, except for the baby she is carrying, fathered by one of many unlikely lovers. There are several suspects and red herrings in Peachtree Battle—all having a motive, means, and opportunity to run down Joy/Lulu. Much of the action happens in the ER or CR, as well as around the thriving metropolis of Peachtree Battle.

As the plot unfolds, it appears the answers may come from uncovering Joy/Lulu’s past. Traveling to Ty Ty, Georgia, then to New Orleans, Sean begins to discover the truth, which inadvertently makes him the target of Sabata, the drug lord. Although unsuccessful with his first attempt, the drug lord plans to assassinate Sean, and nearly does so… but the most unlikely character of all saves Sean from death.

Season 1 of Peachtree Battle is suspenseful, humorous, shocking and action-packed, but it also has numerous interesting, multi-dimensional characters that viewers will come to enjoy– positively, negatively, or comically—perhaps all three.